The Hailstone property is located approximately 100 kilometers northeast of La Ronge, Saskatchewan and is 74.5km2in size. Geologically, the Hailstone property is located within the Central Metavolcanic Belt of the La Ronge Domain of north-central Saskatchewan, which represents a portion of the Paleoproterozoic Trans-Hudson Orogeny. The property comprises a southwest-northeast trending metavolcanic succession intruded by multi-phase intrusive rocks of the Berven Lake Pluton. Gold and copper mineralization on the property is hosted within quartz veins and quartz rich pegmatite dikes associated with southwest-northeast trending shear zones subsidiary to the terrain-bounding McLennan Lake Tectonic Zone. On July 15, 2019, Pelangio entered into a binding Letter of Intent to acquire a 90% proportionate legal and beneficial interest in seven mineral claims located in the La Ronge area, Northern Mining District, Saskatchewan from First Geolas Consulting.

The principal focus of exploration efforts at Hailstone is the Asbell Bay Target where recent prospecting efforts by both Pelangio and previous explorers outlined a mineralized trend in sparse outcrop exposure over 1600m. Significant grab sample values of up to 15.9 g/t gold on the Asbell target by Pelangio geologists in 2019 confirmed the presence of gold mineralization in 2019 and extended the strike length of the trend from approximately 800m. to about 1600m with the discovery of the Luiza showing which returned 2.06 g/t gold (see details in Pelangio Press Release dated October 7, 2019). Note, grab samples are selected samples and not necessarily representative of mineralization hosted on the property.

Highlights of the Hailstone Property

In 2020, Pelangio initiated a target development program at the Hailstone property to follow up on a number of prospective gold occurrences, outlined in 2019 by prospecting efforts in the northeastern portion of the property. The Company completed 95.66 line kilometers (“km”) of airborne magnetic surveying at a line spacing of 30m in order to provide detailed geophysical information over known zones of mineralization. This work outlined a number of linear magnetic features parallel to the McLennan Lake Tectonic Zone and a broad magnetic low, all spatially associated with outcropping gold occurrences.

During the summer and fall of 2020, two programs of till sampling (84 samples in total) were completed and were subject to gold grain analysis by Overburden Drilling Management. A total of 55 samples or 65% of samples collected returned gold grain counts above 20. These results are considered anomalous when compared to a deposit case study in the Star Lake region (Sopuck et al, 1983) approximately 20km to the northeast of the property. A total of seven (7) samples or 8.3% of the samples collected contained highly anomalous gold grain counts with a range of 120 to 270 gold grains in the individual samples. The till sample work also demonstrated significant anomalous responses relative to the known zones of mineralization in outcrop at the Bornite and Crocodile Zones.

Peripheral till sampling proximal to known mineralized zones also detected isolated highly anomalous till samples. To the southwest of the Crocodile Zone one such sample contained 270 gold grains, suggesting further till sampling work is warranted near secondary occurrences and across the property.

Some very limited prospecting was carried out in conjunction with the first phase till sampling program, this work resulted in the discovery of a new bedrock occurrence, designated the North Copper Zone which returned 0.79 g/t gold and 2.14% Cu.

Based on till sample results, airborne magnetic data and surface gold occurrences, an induced polarization survey was focused on the immediate areas surrounding the Bornite and Crocodile zones. Geophysical survey work (IP) resulted in the outlining of eleven targets of interest for follow up drill testing. These targets are currently being reviewed and prioritized.

Currently, a review of all recently completed geophysical data, till sampling results, along with data on the known zones of mineralization in order to define the highest priority drill targets. Pelangio anticipates that a first phase of drilling will be completed on the Hailstone property in the first quarter of 2021. 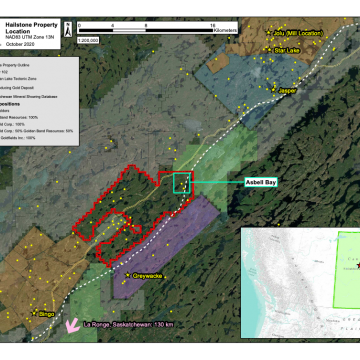 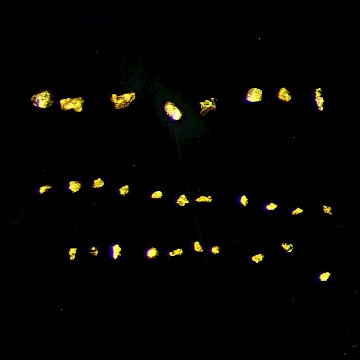