This project is the culmination of Pelangio's original Birch Lake block of claims and the recently acquired Keigat Lake Area Claims through the merger with 5SD Capital (see Pelangio's news release dated December 10, 2018 for further details).

The original land position on which most of exploration work was conducted covers approximately 453 hectares located in the Keigat Lake area, approximately 120 km northeast of Red Lake, Ontario. The original land holdings are subject to an underlying agreement whereby Goldcorp retains a 2% NSR. There are currently no obligations to Goldcorp other than payment of the royalty on production.

Previous work by Placer Dome delineated a gold-bearing system (High Grade Island) over a strike length of approximately 300 metres to a vertical extent of 150 metres. From 1986 to 1996, Placer Dome completed 110 drill holes totaling 19,918 metres, together with mapping, trenching, geochemical and ground geophysical surveys.

Prior to September 30, 2008, the property was subject to an option agreement between Pelangio and Trade Winds Ventures Inc., who spent approximately $1.2 million on the property during the term of the option. Trade Winds completed its drilling activities on High Grade Island during winter 2005. The previous 2004 drilling program consisted of four holes, TWBL-094/095/096/097, totaling 1,102.60 metres, testing the continuity and down-dip extension of the central gold zone located on High Grade Island. The current Birch Lake project includes both High Grade Island and Keigat Island. see map below.

In March 2017, the Company entered into an option agreement with Pacton Gold Inc. ("Pacton") whereby Pacton may acquire a 100% interest in Pelangio's Birch Lake Property, located in Ontario's Red Lake Mining District. Pacton has a right to earn a 100% interest in the Birch Lake Project by paying a total of CDN $375,000 and issuing an aggregate of 4,500,000 common shares over a four-year period to Pelangio. Pacton must also incur exploration expenditures of CDN $1,300,000 over a four-year period.

On April 12, 2018, the option agreement with Pacton terminated on Birch Lake Property without earning any interest in the property. Pacton made the first-year option payment of $75,000 and issued 900,000 common shares to Pelangio and without completing any exploration expenditures. Pelangio retains its 100% interest in this property. 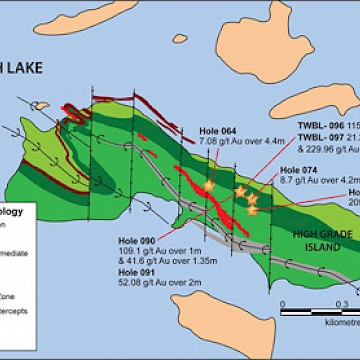 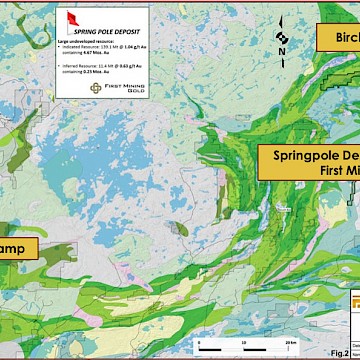