The 100%-owned, Gowan polymetallic project is a 4.3 km2 property located in Gowan Township, 27 km northeast of the City of Timmins, Ontario, and 16 km due east of Glencore’s Kidd Mine Site (see Figure 1). The property is prospective for both copper-zinc VMS deposits with associated precious metals, and nickel-copper sulphide deposits.

The northeastern portion of the Gowan property is underlain by a prospective felsic volcanic package of rocks associated with feldspar porphyritic intrusives. Limited exploration efforts in the early to mid-1970’s focused on evaluating the northern portion of the property for a Kidd-style copper-zinc VMS deposit. These early exploration programs were successful in demonstrating the potential for this type of mineralization. The highlight of these early exploration efforts was a broad semi-massive sulphide intercept grading 0.32% Cu and 0.35 oz/ton Ag over 36 feet.  A shorter interval within this broad section returned 0.66% Cu and 0.31 oz/ton Ag over 12.5 feet including an interval of 0.95% Cu and 0.20 oz/ton Ag across 3 feet.   Also of note is a bedrock sample from the bottom of a reverse circulation (“RC”) drill hole which returned 2.26% Cu and 0.11 oz/ton Au. Very limited follow up was conducted on the massive sulphide intercepts and no drill follow up was completed on the copper-gold occurrence detected in the bottom of the RC hole.  The southern portion of the property is interpreted to be underlain by ultramafic volcanics from limited drilling and magnetic data.  This area of the property is thought to be a prospective for nickel-copper sulphides. (Reference for assay data: Alamo Petroleum Assessment File, R.S. Middleton P.Eng. 1975)

The Gowan property is covered by muskeg and substantial conductive clay overburden which challenged the limits of the geophysical survey technology available in the past. Geological data on the property has been interpreted from limited drilling and airborne magnetic data.

During the spring of 2021, Pelangio flew a VTEM Plus electromagnetic survey over its Gowan polymetallic project, which has the capability to penetrate through the overburden. The final data confirmed a broad 1.5 km by 1 km electromagnetic (“EM”) response located on the flank of a strong magnetic response, proximal to known copper, zinc, silver volcanogenic massive sulphide (“VMS”) occurrences.

This IP target represents a high priority copper zinc VMS target. The anomaly has a southeasterly strike of approximately 400 meters and extends from just below overburden depth to the maximum extent of the ground IP survey at 325 meters. The strength and width of the IP anomaly or chargeability response improves with depth.

Two historical holes designated Hole 2 and 77-1 were drilled parallel to the outer edge of the anomaly and intersected some significant base metal mineralization in a felsic volcanic package. Hole 2 returned 10.97 meters of 0.32% copper and 11.99 g/t silver including a higher-grade intercept grading 3.81 meters at 0.66% copper and 10.62 g/t silver. Hole 77-1 skimmed the southern extremity of the anomaly (see Fig.3) and returned an anomalous section grading 0.18% copper and 2.24 g/t silver over 5.79 meters with a higher-grade section assaying 0.45% copper and 4.8 g/t silver over 1.67 meters. (References: Resident Geologist Assessment Files Timmins Ontario; Drill Reports by Alamo Petroleum and Newmont Canada).

The recently completed IP survey also outlined a broad, moderate, 400-meter wide IP anomaly coincident with the airborne VTEM anomaly and represents a high priority nickel copper target. The IP anomaly starts at approximately 275 meters below surface and extends downwards to the maximum extent of the IP survey at about 325 meters. Notably, the chargeability response strengthens at depth and appears to extend beyond survey depth limitation.

The IP anomaly was detected across all three survey lines cut across the airborne EM anomaly, and extends from east to west for a minimum of 270 meters and is open to the east and west. Limited proximal historical drilling on the periphery of the IP anomaly and short of the anomaly depth suggests that the IP anomaly is hosted in ultramafic rocks (see Fig 3).

A fully funded diamond drill program designed to test both the VMS target and the nickel copper target on the Gowan Property is scheduled for January 2022 when winter conditions allow for cost-effective access via established winter trails. 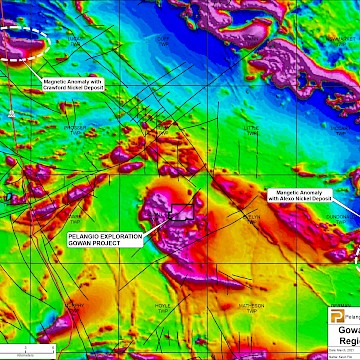 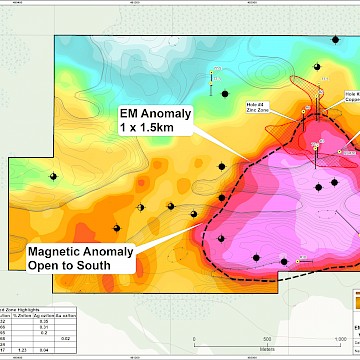 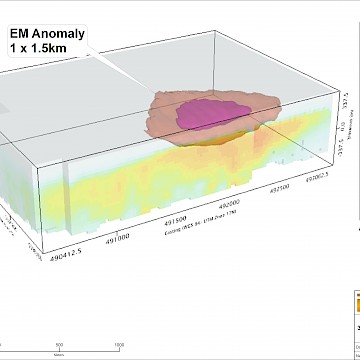