The Dalton Property is located 1.5km southwest of the Hollinger Mine in the Abitibi Greenstone Belt, the largest greenstone belt within the Canadian Shield. Newmont Goldcorp is currently operating a surface open pit at the former Hollinger site. The Abitibi Greenstone Belt is the most prolific Archean terrain in terms of copper-zinc sulphide mineralization and gold mineralization. Major east and northeast trending faults (the Destor-Porcupine Deformation Zone and the Cadillac Deformation Zone) were active through the main period of volcanism. Over 120 million ounces of gold have been produced from mines associated with these two major structures in the Timmins, Kirkland Lake and Holloway gold camps. The Destor Porcupine fault is located approximately 2 km south of the property.

The property has an inventory of historical drill core which has been maintained in good order. A cursory observation of this drill core showed that numerous holes had significant alteration and sulphide mineralization was also observed. A substantial portion of the core was not assayed, and drill logs are unavailable. Pelangio intends to re-log and assay this core and confirm historical drill hole locations in the field for a very cost effective first phase of exploration.

Within the last few years, induced polarization surveys were completed on the property. Pelangio also intends to correlate the survey data with the recent historical drilling upon completion of re-logging and assaying to determine if further drilling is required on established targets or if some targets have not been fully evaluated.

The property has a number of old historical surface trenches and muck piles. Quartz veining and scheelite were observed in the historical surface workings, scheelite (a tungsten rich mineral) was a typical gangue mineral of the gold ores at the Hollinger mine. Additionally, as part of Pelangio's first phase of work, Pelangio intends to re-sample any known mineralized zones as little information is currently available.

In October 2019 total of 504 meters of drilling was completed to evaluate four separate geophysical targets in the extreme southern portion of the property (see Figure 2), proximal to the Destor Porcupine Fault. All drill holes intersected substantial pyrite mineralization in sheared Tisdale Group Volcanics, although no significant gold values were associated with this mineralization. To date the company has drill tested less than 5% of the property and expended approximately $163,000.

Pelangio intends to re-focus its exploration efforts at the Dalton Property on strong gold, silver, and zinc soil geochemical anomalies along the eastern and northern extremities of this very under-explored and overburden covered property. Future work on the project will consist of further geophysical surveying over the soil geochemical anomalies and a phase 2 diamond drill program to evaluate higher priority targets. 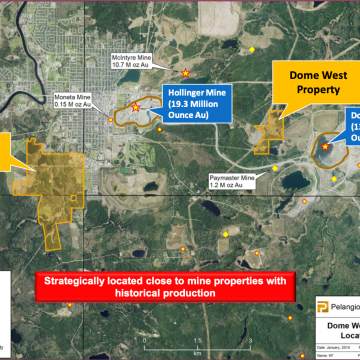 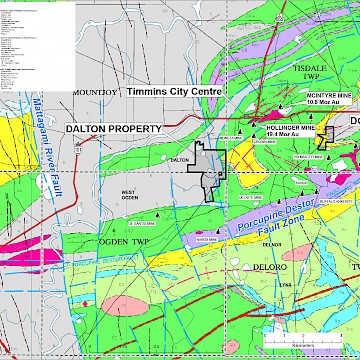 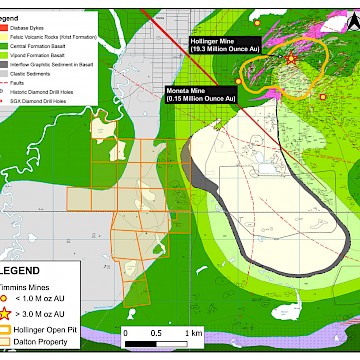 Geology of the Dalton area