Pelangio’s most recent drilling campaign discovered high-grade, vein–hosted visible gold mineralization in sheared graphitic argillites, the typical ore host at the Obuasi Mine. The structural characteristics of the Obuasi Mine’s mineralization consists of shear hosted quartz vein mineralization located within graphitic structures in Birimian sediments (wackes and phyllites) and along their contacts with Birimian volcanics and more competent Tarkwaian sediments. Quartz vein hosted gold at Obuasi is generally “free” gold (non-refractory) and usually high grade. Gold also occurs in silicified alteration haloes around the veins and is associated with fine needles of arsenopyrite. This style of gold is refractory, with gold encapsulated by arsenopyrite grains, and is usually lower grade but tends to develop into wide zones of mineralization. Pelangio’s Obuasi property contains evidence of both styles of mineralization; quartz (+/- carbonate) veining in carbonaceous shear zones in the sediments and locally within mafic volcanics (e.g. at Big Vein) with locally high grades (e.g. the NGA prospect) and also zones of silicification within the sediments, volcanics and dioritic intrusives (e.g. at Kusa) with disseminated arsenopyrite +/-pyrite and elevated gold grades.

A soil sampling campaign conducted post drilling discovered seven areas with greater than 200 ppb gold between 200 metres to 800 metres in strike length. Given the size of the land package Pelangio is exploring, it is the Company’s evidenced opinion that the drilling and exploration programs completed on the Obuasi project have thus far just scratched the surface of the property’s geology. When one considers the target model (a several million oz high grade lode sourced from the massive fluid system that deposited >60Moz a few kilometres to the southwest) further exploration and drilling on the project is demonstrably justified. Robust geological study over the course of Pelangio's interest in the property concludes that numerous D2 anastomosing splay structures emanate from the Obuasi Main Reef Fissure and strike north-easterly into Pelangio’s property. In addition, multiple north-north-east striking D5 structures, comparable to the Obuasi Main Reef Fissure, have been interpreted across Pelangio’s property.  Anyone of these structures has the potential to have channeled mineralized fluids from the Obuasi Mine property with the deposition of a sizeable lode of gold mineralization in a suitable structural trap on Pelangio’s ground. Ongoing data reanalysis and reinterpretation is developing a ranked series of compelling targets for further drill testing. 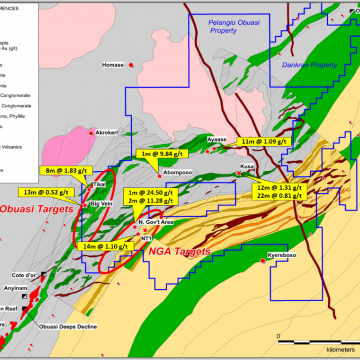 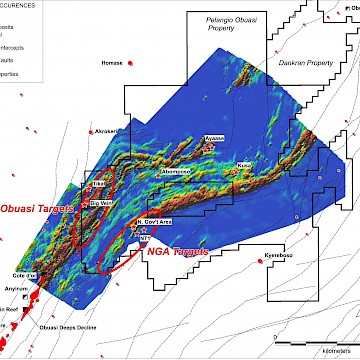 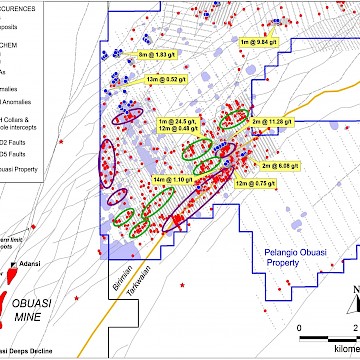 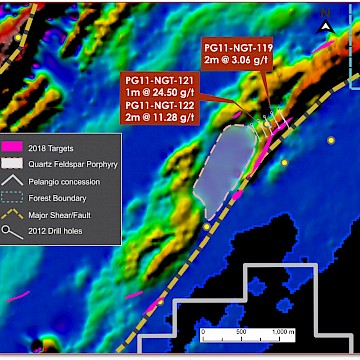 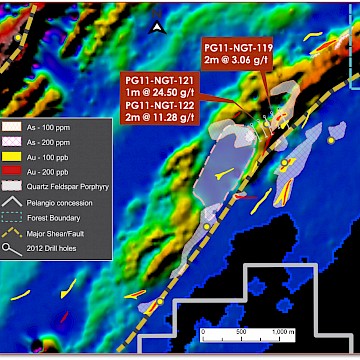