Ingrid Hibbard, President and CEO of Pelangio, commented, “We are very pleased to commence our newly generated work programs at the Manfo project after a long hiatus. We feel confident that with the current stronger gold price, and renewed interested in gold exploration, Pelangio is poised to create value for our shareholders by our renewed exploration on the Manfo project. We approach these newly designed programs after having spent a great deal of time re-evaluating and reinterpreting the vast amount of data generated from previous exploration. Should these initial programs be successful in further discovery at Manfo, resource definition drilling will follow with the aim to add to the current resource base that was established by SRK in 2013”.

Both projects saw considerable exploration work conducted by Pelangio during the period of 2007 through 2012, including the discovery and definition of the maiden gold resource on the Manfo Project. However, minimal work has been conducted on either project since the gold price decline in 2012.

With the strengthening gold price and increasing appetite for investment in quality gold projects, the Company believes that a resumption of exploration activities on its Ghana projects is now warranted. Both projects hold a number of robust exploration targets which have remained untested since the downturn.

In addition, Pelangio geologists have completed considerable data recompilation, reinterpretation and target generation, with additional targets identified for exploration testing. Initial exploration work programs have been designed for the Manfo project and have recently commenced, while the review of data and target generation is in progress for the Obuasi project.

Figure 1 illustrates the location of Pelangio’s projects in southwestern Ghana in relation to current gold production. Ghana surpassed South Africa in 2018 to become the largest gold producer in Africa and produced a total of 4.58 million ounces of gold in 2019. (Source: 2019 gold production figures are from The Ghana Chamber of Mines 2019 Annual Report). 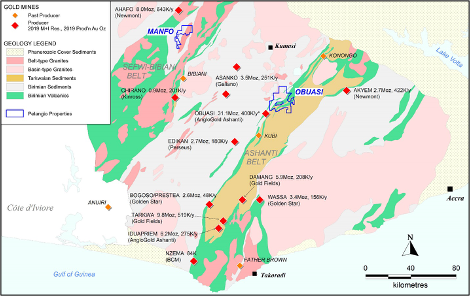 The Manfo project comprises 96 km² of Prospecting Licenses located within the Sefwi-Bibiani greenstone belt in southwestern Ghana, 70 km west of Kumasi the second largest city in Ghana, and 17 km south of Newmont’s 10 million tonne per annum Ahafo plant site. Prior to Pelangio acquiring the Manfo property in 2010, initial exploration work was conducted over the area by AngloGold Ashanti followed by Newmont. During the period of 2010 through 2012, Pelangio conducted considerable exploration work including soil sampling (7,926 samples), trenching (2,921 meters (“m”)), auger drilling (783 holes), a VTEM, magnetics and radiometrics airborne geophysics survey (1,173 line km), a ground gradient IP/Resistivity survey (36 km2) and 178 diamond drill holes for a total of 37,313 m were completed. Drilling discovered seven significant gold prospects along a 9 km mineralized trend and defined a maiden resource in three of the prospects, Pokukrom East and West plus Nfante West, of 195,000 oz (at 1.52 g/t Au) Indicated and 298,000 oz (at 0.96 g/t Au) Inferred, estimated by SRK in June of 2013. Refer to the Mineral Resource Evaluation Technical Report, Manfo Gold Project, Ghana, authored by SRK and released by Pelangio on June 21, 2013.

In addition to the resource estimation, SRK also reviewed all of the exploration data including the airborne geophysics data and conducted a geological and structural interpretation and generated multiple targets for follow up with more soil sampling plus rotary air blast (“RAB”), reverse circulation (“RC”) and diamond drilling (“DD”). The majority of these targets remain untested.

Since 2012, exploration work conducted by Pelangio on the Manfo project has been limited to several rounds of data review and target generation culminating in a small drilling program conducted during October 2017 through April 2018 consisting of 63 air core (“AC”) and RC holes (2,524 m) plus 5 DD drill holes (882 m) to test the strike extension of the Nkansu prospect plus conceptual exploration targets to the east of the principal mineralized trend. This last drilling program at Manfo addressed few of the targets generated by SRK’s work and returned generally weak to modest results.

Recent data review and reanalysis has shown that multiple compelling targets, including those generated by SRK’s work, remain on the Manfo project and warrant further work. The deposits that constitute the current resource at Manfo appear to have limited potential for significant extension immediately on strike, however there may be potential for resource expansion down-plunge. Exploratory drilling along strike from several of the prospects, particularly Nkansu, Nfante East and Sika North is justified, and there are gaps in the drilling along the principal mineralized trend of up to 1 km which should be evaluated by scout drilling.

In addition, areas of lower tenor gold (“Au”) in soil anomalism coinciding with structural targets identified by SRK’s work are present along and near to the principal mineralized trend, and relatively robust Au in soil anomalism is evident along a subparallel trend 2 to 3 kms to the west of the main trend. The soil sampling to the west of Pokukrom West was on 400 to 800 m spaced lines and is therefore fairly coarse and may have missed areas of mineralization. Also, there is very limited soil sampling over a 900 m strike south of Nfante East to the southern property boundary. Planned exploration work at Manfo intends to address these gaps in the current soil sampling coverage.

A program of soil sampling has been designed consisting of 1,404 samples covering the area south of Nfante West plus areas of interest to the west of Pokukrom West. The sampling has been prioritized by interpreted prospectivity, with Priority areas 1 through 3 (747 samples) comprising Phase I of the program and Priorities 4 through 7 (657 samples) being Phase II of the program. Phase I soil sampling commenced on July 15, and it is anticipated that Phase II will follow shortly thereafter. Refer to Figure 2. 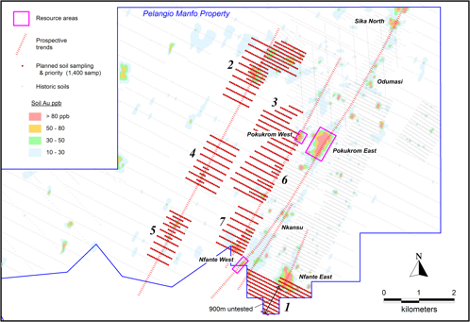 In addition to the soil sampling, a program of RAB drilling has been engineered as a first pass drill test of some of the more promising targets generated by SRK’s work (geological, structural and geophysical targets) coincident with generally lower order Au in soil anomalism. These targets occur along and near to (within 1 km of) the principal mineralized trend and will be tested by 15 “heel-to-toe” RAB drill fences for a total of approximately 7,000 m of RAB drilling. Refer to Figure 3. The RAB drilling is not contingent upon completion of and receipt of results from the current soil sampling programs and accordingly can be initiated anytime, however it is best deferred until after the current rainy season to later in the year.

Contingent upon the results of the soil sampling and RAB drilling programs, follow up testing of favourable results by RC (and possibly DD drilling) is anticipated. An amount of 3,500 meters of RC drill testing is proposed. 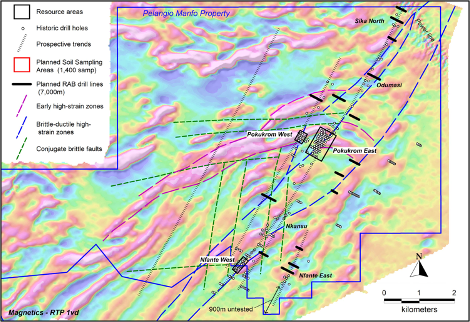 The 284 km² Obuasi project is located within the Ashanti Belt of southwestern Ghana, and immediately adjacent to AngloGold Ashanti’s Obuasi Mine. Data reanalysis and targeting exercises are ongoing for the Obuasi project and exploration work plans are being developed.

Mr. Kevin Thomson, P.Geo. (Ontario), is a qualified person within the meaning of National Instrument 43-101. Mr. Thomson approved the technical data disclosed in this release.

Pelangio acquires and explores land packages in world-class gold belts in Canada and Ghana, West Africa. In Canada, the company is focusing on the 6.7 km2 Grenfell property located approximately 10 km from the Macassa Mine in Kirkland Lake, the Dome West property located 800 meters from the Dome Mine in Timmins, the 34 km2 Birch Lake and Birch Lake West properties located in the Red Lake Mining District and the Dalton Property located 1.5 km from the Hollinger Mine in Timmins. In Ghana, the Company is focusing on two 100% owned camp-sized properties: the 96 km2 Manfo Property, the site of seven near-surface gold discoveries, and the 284 km2 Obuasi Property, located 4 km on strike and adjacent to AngloGold Ashanti’s prolific high-grade Obuasi Mine. Ghana is an English speaking, common law jurisdiction that is consistently ranked amongst the most favourable mining jurisdictions in Africa.