Pelangio has entered into a binding Term Sheet with Supercare Group Limited ("Supercare") to acquire a 90% interest in the 60 km2 Abansuaso Prospecting License located adjacent to the Manfo project.

Highlights of the Abansuaso Property

The Nfante West deposit, similar to the other deposits and mineralized zones at Manfo, is hosted in a metagranodiorite and is related to silica-sericite-dolomite alteration with associated quartz-dolomite veining plus disseminated pyrite. Weaker gold mineralization tends to be associated with hematite +/- sericite alteration. The mineralization at Nfante West dips steeply to the west at 70 to 80 degrees and is generally bounded by a brittle-ductile shear zone along the contact with mafic metavolcanics on the footwall side to the east. The Nfante and Nfante East mineralized zones are similar, weaker versions of Nfante West.

During the period from 2011 to approximately 2015, the Abansuaso property experienced considerable artisanal mining activity, at times utilizing heavy equipment, which resulted in a total area of approximately 18 hectares mined along three subparallel zones over a strike length of 1,500 meters and across a width of up to 800 meters. The artisanal miners worked oxidized elluvial (saprolitic) material and numerous hand-dug vertical shafts as deep as the water table (20-30 meters?) were excavated targeting quartz veining along the three mineralized trends, with processing by crushing and sluicing. Much of the mining activity was along the strike extension of the Nfante West deposit, with two mineralized trends apparent to the east, the easternmost of which appears to correspond to the strike continuation of the Nfante mineralized zone. The majority of the artisanal mining area has not been tested by drilling, and Pelangio has not sampled the mining stockpiles to verify gold tenor.

The historic artisanal mining activities and the previous exploration by Anglogold Ashanti have demonstrated the presence of three or more mineralized trends extending southwest from Pelangio’s Nfante and Nfante West prospects onto the Abansuaso property, identifying a high priority drill-ready exploration target area of approximately 2.5 kilometers in strike and 800 meters in width. Upon the finalization of the formal agreement with Supercare and necessary permitting, Pelangio intends to drill multiple fences of diamond and RC holes across the target area in order to rapidly assess the potential of the mineralized trends which were lightly tested by Anglogold Ashanti, possibly leading to resource definition drilling. A further 2.5 kilometers of strike of the trend to the southwest is covered by the Abansuaso property and will likely be evaluated with soil geochemical sampling as a first pass. 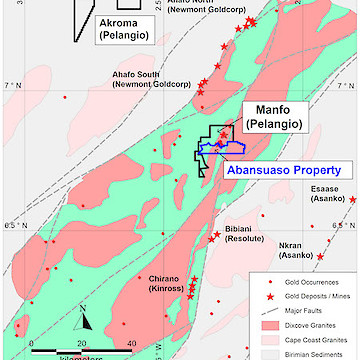 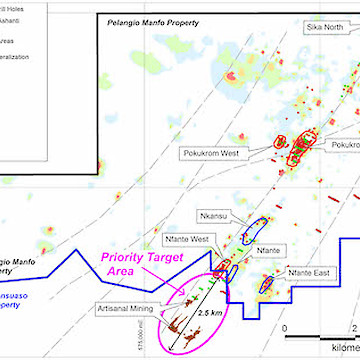 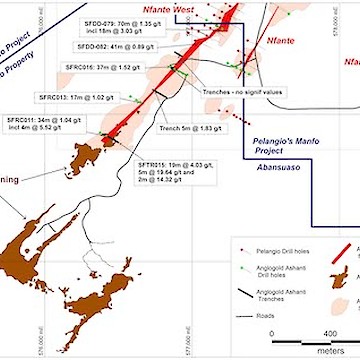