Pelangio's Dome West property is located within the main Timmins camp approximately 800 meters west of Newmont’s Dome super pit and approximately 450 meters northwest of the former Paymaster shaft. In 2019, Pelangio completed a single 543-meter drill hole on the property, representing the first and deepest hole on the property since the late 1930's. The purpose of the hole (DW1901) was to evaluate the strike extension of a prospective porphyritic intrusive sill interpreted to extend from the former Paymaster Mine The hole confirmed the presence of seven new quartz veins within the prospective stratigraphy extending from the Dome and Paymaster Mines and  intersected a mineralized interval that returned 3.21 g/t gold (“Au”) over 1.25 meters including a higher-grade intercept of 4.754 g/t Au over 0.75 meters. The gold was associated with quartz stringers and up to 5% pyrite in a strongly altered leucoxene bearing mafic flow extending from 407.00 to 476.75 meters. Also, of note, were two small specks of visible gold observed in a small vein at 260.75 to 260.87 meters; this vein was also hosted in an altered leucoxene bearing flow. The original assay from 260.70 to 261.00 meters returned <0.005 g/t gold but a subsequent gold fire assay metallic screen analysis returned 0.48 g/t gold over 0.30 meters. The coarse fraction of the screen analysis (Au+100 mesh) returned 6.67 g/t gold confirming the presence of the visible gold observed. The vein with visible gold was within 1 meter of an altered quartz eye porphyry dyke contact.

It should be noted that reference material on the adjoining Dome Mine (Rogers, D., CIM Paper, 1982) indicates that early diamond drilling on many productive mined vein systems did not accurately reflect the eventual mined grade of a vein. Underground development was often required to accurately reflect the grade of a vein system. Consequently, Pelangio is encouraged that its early-stage drilling intersected seven separate veins in its first drill hole - two of which were gold bearing.

In March 2021, a more thorough review and compilation of data was completed.  This review compiled historical level plan data from government reports and underground drill hole data from the adjoining former Paymaster Mine to plan the current drilling on the Dome West project.

Two underground Paymaster Mine drill holes collared at the 1000-foot level (304.8 m) of the mine to the east of the Dome West property boundary (Figure 1 and 2) demonstrated the existence of a gold-bearing feldspar porphyritic (“FP”) intrusive sill proximal to the south property boundary. The better gold values from this FP intrusive sill returned 59.6 g/t gold over 1.98 m.  Due to the proximity of the gold bearing FP intrusive to the Dome West boundary, interpretation suggests that the down dip projection of the FP sill extends into the Dome West property along with one other prospective FP sill.

In November 2021, Pelangio began a 1,200-meter diamond drill program with a planned 900 meter drill hole (DW2101) to test the strike extension of a large gold-bearing felsic fragmental volcanic unit, and the dip extension of a gold-bearing porphyry sill, as well as the the Vipond stratigraphy as seen in accompanying figures. A second, shorter 300 meter hole, to further test the up dip portion of the felsic fragmental and a prospective porphyry sill proximal to the hanging wall of the Vipond stratigraphy is planned as well. The second hole is contingent on a review of the stratigraphy and/or mineralization noted in the first hole. The dip and length of the second hole may be altered to better evaluate zones of interest.

A cursory review of initial drill core from Pelangio hole DW2101, suggests an early geological interpretation (1953) by Paymaster geologists of a large gold bearing porphyritic unit in the end of Paymaster underground drill hole P10156 is in fact a felsic fragmental volcanic unit with porphyry fragments and feldspar metacrysts in the matrix. Ferguson, S. in OGS Report 58 (1968) designated this unit the the Krist Fragmental. A sample from within the felsic fragmental from the historical underground hole P10156 returned 21.6 g/t gold over 1.82 meters along with numerous anomalous intercepts ranging from 0.342 to 1.03 g/t gold. (See Figures)

Further, the review of composite level plan data (Figure 4) from OGS Report 58 (Ferguson, S.1968), and a recent Pelangio drill hole, DW1901, demonstrated that the prospective Vipond stratigraphy which hosted a substantial portion of the ore at the Dome and Paymaster mines crosses the Dome West boundary from the Paymaster Mine at the 1000-foot level (304.8 m). (See Figures) This is a third significant target horizon that is untested on the Dome West Property 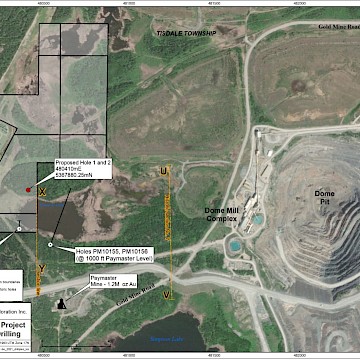 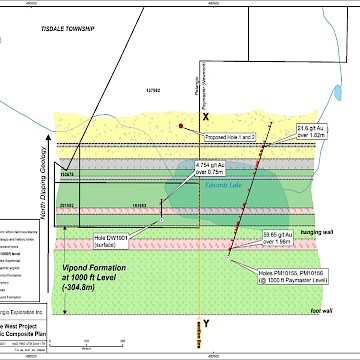 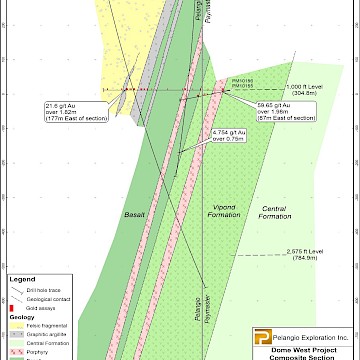 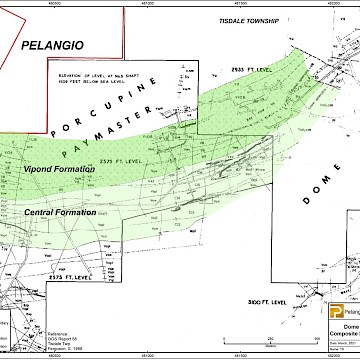